The other day I threw together a marinade for some Pork Tenderloin (Premium Swift from Costco – great deal) with some miscellaneous items I had around the kitchen. It ended up turning out really tender and quite tasty. I’m not a big believer in measuring at least in instances like this. Cookies or something like that sure you need specific quantities. But when doing marinades or soups etc I just go by the seat of my pants. So the measurements below are best guesses. I thawed half of the tenderloin (comes in two packs, with two pieces per pack) and placed in a large zip lock. I then proceeded to add the following ingredients to the bag and let it marinate for about 6 hours in the refrigerator:

As mentioned previously, the tenderloin and all these ingredients went into a large zip lock bag. I mixed everything together to make sure the loins where nicely covered and then put in the refrigerator for about 6 hours. Cooked on a gas grill outside to about 160 degrees internal temp with a nice sear on the meat. And below is a picture of one the two pieces of tenderloin. Bon Appetit! 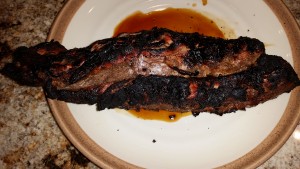